READ: How Healthy is your appetite for risk?

There is an element of risk in everything we do because even doing nothing has risks attached to it, especially in today’s volatile and uncertain world.  What is your appetite for risk and is it balanced enough?

With hindsight it is easy to see that the West’s impulsive adventure into Iraq in 2003 didn’t take the complexities of the local sectarian alliances and animosities into account.  It is also easy to see that the Board of Directors at Kodak didn’t exploit the opportunity presented by Steven Sasson, one of their engineers.  Back in 1977 he invented the first digital camera.  The directors were very cautious about the idea because they didn’t believe that people would want to view their photos on a TV or screen and the marketing department was adamant that it didn’t want to erode Kodak’s massive share of the market for 35mm film.  This initial lack of willingness to take a risk, combined with lots of impulsive but fruitless attempts to change as the world changed around them, ultimately destroyed the business which went into receivership in 2012.

The last 20 years are full of examples of big brand companies that were too cautious and remained inactive, or became impulsive by undertaking a number of knee-jerk initiatives that damaged the foundations of the business, making it impossible to recover.  Research shows that a lot of the thinking behind these unsuccessful behaviours is based on strongly held assumptions which create blind-spots that can prevent directors and managers from effectively analysing the potential pitfalls or being willing to take a risk.

As a director or manager you will have your own personal preferences and traits in regard to risk and it can be useful to have some distinctions that illuminate the paradoxical nature of how to develop a balanced and mindful approach to strategy.  The proverb for this could be: “Have the courage to pursue success, but understand and manage your risks”.

Dr Dan Harrison has developed an interesting and insightful tool that neatly illustrates a number of paradoxes.  The paradoxes are made up of two key traits that could be said to contradict one another, but when they are exercised in equal measure they provide a healthy middle way.  This approach reminds me of the story of the Buddha who was meditating on the bank of a meandering river when he overheard two musicians who were drifting gently downstream, having a conversation.  They were discussing the tuning of a stringed instrument and how, if the strings are too slack, ‘it’s not right’ and if they are too tight, ‘it’s not right’.  This influenced his thinking of finding a ‘middle way’.

The same can be said for the key traits in the Harrison paradoxes.  If either of the opposing traits in the paradox is too strong or too weak it creates an imbalance that produces unproductive aggressive or passive behaviour.  When they are balanced they produce a new highly effective behaviour.

The Paradox of Strategy 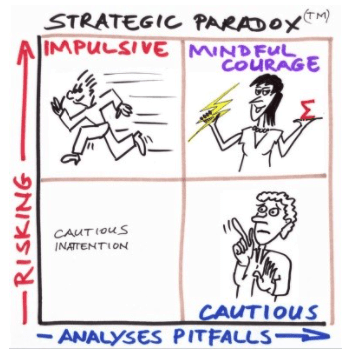 The two key traits of the ‘Strategic Paradox’ are:

Risking: The tendency to feel comfortable with business ventures that involve uncertainty.
Analyses Pitfalls: The tendency to scrutinise potential difficulties related to a plan or strategy.
Risking is seen as a dynamic trait and when it is not tempered with Analysing Pitfalls it becomes the trait of ‘Impulsiveness’.  This creates an aggressive imbalance with a tendency to take risks without sufficient analysis of the potential difficulties (‘High Risking’ and ‘Low Analyses Pitfalls’).

On the other hand, if analysing pitfalls is not moderated by a healthy dose of risking it will create a passive imbalance and the trait of ‘Cautiousness’.  This is the tendency to focus on potential pitfalls of a plan or strategy while being very careful about risks (‘Low Risking’ and ‘High Analyses Pitfalls’).

When both of the key traits are exercised in equal measure you get the trait of ‘Mindful Courage’. This is the tendency to take risks while at the same time sufficiently analysing the potential pitfalls of the plan or strategy (‘High Risking’ and ‘High Analyses Pitfalls’).

It is also possible to have a low tendency in both of the key traits and this produces an unfortunate trait called ‘Cautious Inattention’.  This is the tendency to be cautious about risks while at the same time paying little attention to the potential pitfalls of a plan or strategy (‘Low Risking’ and ‘Low Analyses Pitfalls’).

How many of the traits above can you see in yourself or others?

Being a manager or director means that you are faced with challenges every day and your willingness to put the effort into analysing pitfalls sufficiently, as well as having the courage to take appropriate risks, is critical to success in your role.  You probably have a sense of your own preferences and the preferences of your team but it can be very refreshing to take an objective look at it from a new perspective and discuss the implications with colleagues.  This objectivity can highlight the overall preferences of the team.  If you are in the senior team you may want to consider the following:

The persistent volatility, uncertainty, complexity and ambiguity of the economy mean that we need to have high levels of self-awareness, so we can identify our personal traits and the traits of our teams.  This enables us to challenge the assumptions we are making and avoid the behaviours that may cause us to be impulsively busy or cautiously inactive, and explore the middle way of ‘Mindful Courage’.

To get a more objective perspective of your traits and your possible blind-spots in the Strategic Paradox, as well as the eleven other paradoxes in the assessment, just contact Gloria at info@talent4performance.co.uk.

Remember, especially as you consider your strategic approach . . . stay curious!

READ: What is better logic or intuition?

READ: Are you innovative enough to succeed?

READ: Are You Being Too Helpful For Your Own Good?