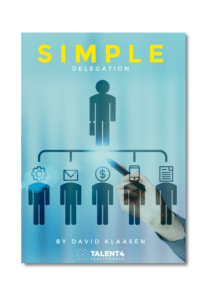 Get your copy of SIMPLE Delegation!

In this book we will be sharing some very practical tips and techniques. You will learn the six key principles of delegation that can be applied in a variety of ways.

Using them will guarantee success when delegating tasks or projects to your people.

Over the last few years there has been a consistent theme with many of our clients. . . “My managers are running around doing the stuff they should be delegating”  . . . often followed by . . . “I’m so busy – but I can’t delegate this, it’s too important!” Is this familiar to you?

It’s time to look in the mirror

We love the way we can easily see the faults in others but somehow find it difficult to step back for a moment and to look in the mirror.  It is useful to take the time to ask, “How am I contributing to this situation?”  It can be a very uncomfortable thing to do, and it takes self-awareness with a good dose of courage.  But the rewards can be quite profound.

We’re always impressed by leaders who have faced what often seemed like insurmountable odds yet have had the humility to look at themselves and recognise how they are contributing to the problems and that any change must begin within.

When we mentioned this to a client recently, he said “That’s all very good and I see your point, but I’m too busy to indulge in the luxury of navel gazing”.  We were not convinced he saw the point at all! 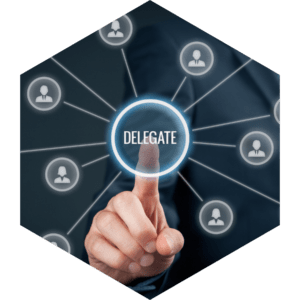 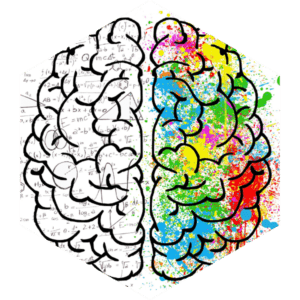 Delegation is an art rather than a science

How much time do you give yourself to . . . think?  To tap into internal resources  . . . allowing the creative process . . . to flow? We all have an innate creativity and that needs to be nurtured in order for it to flourish.

So what does creativity have to do with delegation?  Well in our opinion, delegation is an art rather than a science.  There are always so many variables and each individual, to whom you want to delegate, is different and will have their own motivational preferences, experiences, mindsets, habits and behaviours that they will bring to the table.

David’s father was a Graphic Artist and used to churn out an amazing number of unique designs.  Back in the 1960’s and 70’s he would work evenings to design book covers to earn extra money for family holidays abroad.  He was a real master of his trade.  When David was growing up, as a young kid he could go into any Dublin bookshop and be sure to see 5 to 10 of the covers his father produced on the bookshelves.  He even designed many of the text books David used at school. Later he became a lecturer in Graphic Design and influenced a generation of young Irish designers. Every book cover he designed needed to have at least 3 different draft designs for the publishers to choose from and David once asked him how he managed to do so many.  He simply replied that there were a number of ‘Principles and Techniques’ and all he did was apply them in a variety of ways.  That made a big impression on David.  Later when reading the First Edition of Principled Leadership by Stephen R. Covey, David was delighted to see the same message.  Leadership is not about ‘Rules’ it is about a few basic principles that can be applied in a variety of ways.

In this book we will be sharing some tips which could be seen as key principles and techniques that can be applied in a variety of ways and that will guarantee success when delegating tasks or projects to your people.

The acronym SIMPLE works well as a reminder for each of the tips.

S is for Specify the outcome

I is for Involvement

M is for Motivation

P is for Planning

L is for Letting Go

E is for Evaluate

You can now learn how to master each of these principles and more!

This short book is packed with clear, concise and very practical tips and techniques that will transform your management style and help you lead with clarity and passion and purpose.

Don’t be the bottleneck in your business.

It’s up to you to decide whether you want to carry on as you are, or guarantee success when delegating tasks.

Once you have this book you will discover how to lead manage and develop your people in a way that they will respect, remember and admire.

Guarantee success when delegating tasks or projects to your people!