READ: Understanding the Flip Side of Communication

Many politicians are unbalanced, but not in the way you may think. They often answer questions and speak in a manner that makes it difficult to understand what they actually mean. Their strong desire to be diplomatic means that all too often they say lots of vague and ambiguous words that leave you none the wiser. At the opposite end of the scale you get Chefs like Gordon Ramsay who blurt out very frank and often highly offensive statements that would send most people into a spin. This means they often reject what he is saying. While this can make entertaining TV it is not an effective style of communication in most contexts.

Neither of the examples above is effective in business because there is a paradox in communication. In order to be a highly effective communicator you need to be versatile in two complimentary, or one could say paradoxical, traits. If they are not balanced they can create psychological and communication rigidity.

For example, if I’m extremely diplomatic I will always seek to be tactful and avoid upsetting people. I will allude to things and talk around them rather than being too direct. However, this approach and mind-set can lead to me forming a belief that being frank and to the point is bad, hurtful and offensive. I will consistently seek out all the evidence I can to confirm my belief that being frank is wrong and I will avoid it at all costs. I will shun frank people and dismiss them as ‘difficult’ or just ‘ignorant’. I will be unable to see that my virtue of diplomacy, when it is unbalanced, misses the point and can lead to confusion.

However, if I’m very frank I will always make a point of saying what needs to be said and consider it a virtue. I will emphasise the need for ‘honesty’ and ‘the truth’. I’ll hold a belief that diplomacy is soft, wishy-washy and just a way of pandering to people’s hyper-sensitivity. I will be unable to see that if my virtue of frankness is unbalanced it is actually a vice.

Imbalances in the paradoxical traits of frankness and diplomacy cause endless problems at work and in the world at large. When there is an extreme imbalance between the two traits, people become very rigid and inflexible in their behaviour and attitudes. When a trait is rigid or fixed, the individual tends to blindly focus on the positive manifestations of that trait and ignore the negative ones. This creates automatic and habitual behaviours that repeat over and over again. People who are stuck in these patterns are not conscious of it. They don’t see that they are limiting their effectiveness and often end up damaging important relationships because they have lost any element of choice in their behaviour. They end up believing that ‘that’s just the way I am’.
Where there is a strong imbalance in the paradoxical traits there is also an interesting side effect.

Each trait has an equal and opposite internal psychological force which manifests under pressure. So, when the person with very high levels of diplomacy and low levels of frankness gets frustrated that people don’t ‘get it’ or ‘can’t take a hint’, they ‘flip’ into being blunt. Likewise, I have seen many very frank leaders who are normally rather blunt, flip into evasiveness. For example, there are times when I have been asked to coach a senior manager about their behaviour and when I meet with them and ask them why they think they are having some coaching they don’t know because the normally blunt leader has been very evasive about what they are doing wrong! I now always ensure that there is more clarity for the Coachee and this sometimes means coaching the leader first.

By becoming aware that there is an imbalance in their approach, most people can begin to notice that there are some benefits to the complimentary traits that they have been avoiding. This helps them acknowledge that improvements are possible and that making changes may even help them achieve their goals.

We often have difficulty admitting to our disowned trait and will probably not notice it unless we are made aware of it when we are under pressure and even then, we may get defensive about it because it seems so justifiable to us given the circumstances.

The Paradox of Communication 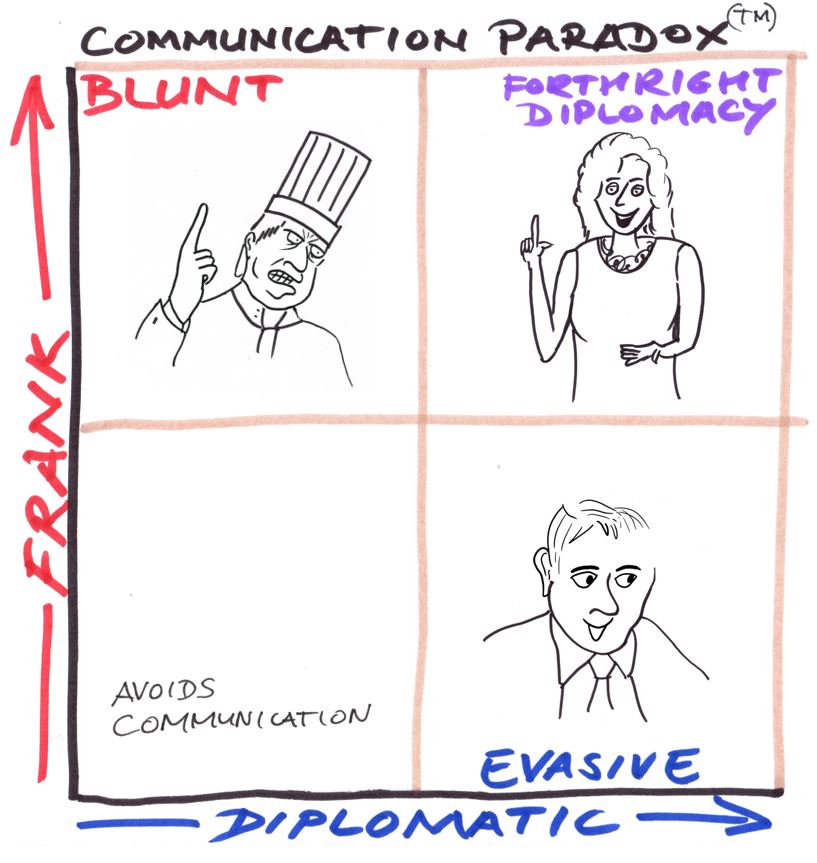 The Paradox of Communication is illustrated on the right: There are two primary traits in the paradox of communication.
Being ‘Frank’ is the tendency to be straightforward, direct, to the point and forthright.

Being ‘Diplomatic’ is the tendency to state things in a tactful manner so they can be heard without causing offense.

Each paradox also has four sub-traits that clearly illustrate where a person has balanced versatility (both primary traits are strong) or one of the imbalances described above. For example, ‘Forthright Diplomacy’ is the tendency to be forthright and respectful at the same time (High Frank and High Diplomatic).

If you have low frankness and high diplomacy you may have a passive imbalance and this can lead people you see you as being ‘Evasive’. That means having the tendency to be tactful without being sufficiently direct. However, if you have the tendency to be frank or direct while lacking in diplomacy or tact (High Frank and Low Diplomatic), you will be seen by many people to have the aggressive imbalance of being ‘Blunt’.

There are also some people who avoid communication (Balanced Deficiency), which is the tendency to lack frankness as well as diplomacy (Low Frank and Low Diplomatic). In extreme cases this this can lead to a build-up of frustration that, under pressure, flips to either bluntness or evasiveness depending on the context.

There is plenty of evidence of politicians getting into trouble for their ‘flips’. For example, saying very blunt comments about the public or other foreign dignitaries when they think they are off camera but microphones are still on. It was also interesting to see how evasive Gordon Ramsay was about the financial difficulties and extended family problems that hampered his businesses.

It is important to recognise that many people are under chronic pressure at work and their flips are almost becoming normal behaviour, which is putting them under immense strain because their communication is not coming from their preferred tendency.

A number of clients are now using the Harrison Paradox Report to identify their personal strengths and areas for development. For each primary trait that needs development there is a simple report that can be produced which provides a clear development plan to help managers develop themselves or coach their people.

If you are interested in exploring where you and your managers stand on this Paradox and the eleven other Paradoxes in the assessment please contact us at info@talent4performance.co.uk

READ: The Danger of Certainty in an Uncertain World

READ: What is your level of Strategic Acumen?

READ: How Healthy is your Self Esteem?